John Burness is a businessman and adventurer of some thirty years’ standing. Starting in high technology sales, he went to work for a multinational company, which allowed him to put some money in the bank before beginning his entrepreneurial journey. With little experience, he and some partners began a start-up – initially running the company from the front room of a house.

Since then he has built, managed, bought and sold companies in the UK and Europe, mainly in the IT sector, as well as conducted several business turnarounds. He has partnered with most of the major IT suppliers, including IBM, Microsoft and Oracle, and over the years has been involved in high-level business delegations to several countries, including Russia and China. He has been personally responsible for the sale of hundreds of millions of pounds-worth of IT-related goods and services and, in common with most entrepreneurs, for the creation of numerous jobs and the payment of a significant amount of tax to the exchequer. He is also a coach and mentor and supporter of homeless charities.

In parallel to a business career, John has been involved in many adventure expeditions, including several supercold journeys above the Arctic Circle. He entered the world of the explorer in the same way as he entered the world of business: with little experience and completely unprepared for what was to come. He turned up to a North Pole expedition selection weekend on Dartmoor with a borrowed anorak and wearing a pair of trainers. Much to his surprise, he passed, and ultimately his experiences in the Arctic, and his face-to-face encounter with a polar bear while in Greenland, changed his thinking about his own mindset and that of the entrepreneur forever.

In 2015, John founded Axiom Two with the explicit aim of supporting entrepreneurs, business owners, directors and senior business managers around the world in their vital but often very isolated roles. 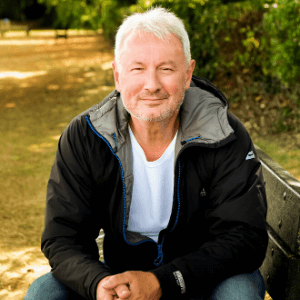 Against The Odds is now
available to buy on Amazon